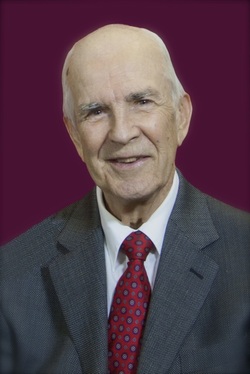 Harold Graham was a remarkable gentleman to whom the Coalition for Quality End-of-Life Care owes considerable thanks.  A chemical engineer with a PhD from Iowa State University, in retirement, at age 68, he decided to go to law school. After graduating at age 71, he practiced for over ten years—much of the time doing pro bono work. He helped several small nonprofit organizations such as ours with all the legal paperwork required to be incorporated in the state of Texas. He then helped CQEC obtain recognition by the IRS as a 501(c)(3) organization on our first attempt—which I understand is not an easy feat generally speaking.  Thank you, Harold, for all of your assistance.        -Kendra Belfi, MD

Born in Cleburne, Texas in 1930, to LaVerne and Hazel Graham, his dedication to service and patriotism led him to enlist in the Navy in 1950 where he served four years as Electrical Technician in the Korean Conflict. It was during his service years that he wed his life’s love, Veranne Hall on June 24, 1952.

Harold began his lifelong quest for knowledge as a child when he built everything in 1000 Things for Boys to Do. He went on to acquire a B.E. in Chemical Engineering from Vanderbilt. When he returned to Vanderbilt to begin post-graduate studies, he was invited to serve as a full faculty member, which he did for six years. He received an M.S. in Chemical Engineering at Vanderbilt University and a PhD at Iowa State University.

He rose through the professional ranks of Exxon to manage national and international projects across the globe, which included responsibility for Long Range Planning and Logistics for the Eastern Hemisphere during the oil embargo.

Once ‘retired’ from Exxon, Harold started his own consulting company, Greyhame Enterprises, specializing in project planning and management for small companies and Fortune 500 industries. In this capacity, Harold was consultant for the IT department of Compaq Computer Corp. Harold’s dedication to public service included joining many municipal organizations and serving on the city council and ultimately as Mayor of the City of Seabrook, Texas.

When his beloved wife, Veranne, began to experience difficulty walking, Harold acquired a license as a professional massage therapist. He then traveled all the way to China to study acupressure. His skill enabled Veranne to walk free of the wheelchair.

At the age of 68, Harold returned to academia to become the oldest graduate of  South Texas College of Law. Admitted to the Texas Bar at the age of 71, he practiced law for another decade – dedicating himself to pro-bono work and counseling couples in need.

At the age of 82, Harold fulfilled a pilgrim’s dream of walking the Camino de Santiago. Accompanied by his daughter Linda, ‘Harold from Houston’ hiked the 500 mile trail across northern Spain, where he laid his burdens to rest at the feet of our Savior. He will be missed.